A Standby Observer's View of the Protests

As a student journalist and communications intern, I’m naturally fascinated by political unrest. The recent rallies in protest of Governor Scott Walker’s proposed budget repair bill (http://legis.wisconsin.gov/JR1SB-11.pdf) have been a particularly interesting event for me to watch unfold.

But I have only been able to watch from the outside. During times of major protesting and rallies, I’ve been working. Perhaps it’s ironic, since the future cost of my tuition is uncertain, and I’m unable to stand up against it because I’m otherwise occupied trying to pay my current tuition. That aside, it’s been a fascinating experience to see as an observer.

I work two blocks from the Capitol on State Street, in a building with a wall of windows facing the street. Heavy foot traffic and high visibility have lent themselves to a good amount of people watching. The most interesting thing for me to see has been the variety of signs. If their voice cannot be heard, it can be seen.

Apart from the standard “Kill the Bill” or “Stop the Attack on Wisconsin Families”, and a good amount of jokes or obscenity, I’ve seen a good mix of different messages. My favorite so far is also pretty common, “If you can read this, thank a teacher”.

Teachers are by far some of the most vital members of our community. Education is the tool which people use to develop skills and become a contributing member of society. As a first-generation college student, I’ve fought hard to get an education, and I appreciate every one of my teachers and professors that have gotten me this far. The fact that the quality of education I will receive in the future is in jeopardy is unsettling. Financial recovery at the cost of education is an incredibly nearsighted, dangerous prospect of fixing the present without considering the possible implications of the future.

Perhaps soon, when I’m not studying (none of my classes have been cancelled thus far, a fact that I’m also appreciative of) or working, I’ll be able to make it to the Capitol to see for myself what’s going on. This is an incredible time to be a part of a democracy, as we’ve seen in Tunisia and Egypt, and an increasing number of other Middle Eastern countries. In my journalism class, we learned about a concept called “mediated worldliness”, which is the idea that through the media, we are able to experience things and be a part of events all around the world. We can all feel like we’re a part of the democratic process surrounding the passing of this bill by reading about it or hearing about it. Regardless of affiliation, nothing is a substitute for actually standing up, saying something, having an opinion, or voting.

Be an active part of your democracy and value your education that allows you to do just that, they are both things we all tend to take for granted.

Posted by WCSU Communications Intern at 12:11 PM No comments:

The New Badger Partnership - What it Means for You

We’ve all heard talk of the “New Badger Partnership” somewhere, whether it was on the wisc.edu homepage, in one of the local papers, or from a professor or friend. But what does this Partnership really entail? Who is partnering and for what purpose? The details may seem foggy, but the way I see it, there are three main parts to this idea: efficiency within the University of Wisconsin-Madison, flexibility for the UW, and creation and retention of jobs at the UW.

Everyone is aware of the economic climate, and while we’ve heard that “economic times are tough” over and over, sometimes it’s hard to see what’s being done about it. The New Badger Partnership is proposing to increase its efficiency in order to keep costs manageable. With Governor Scott Walker’s budget work underway, the UW wants to be part of the solution to the economic hardships facing the state of Wisconsin, not one of the problems. Asking for additional funding at this time is somewhat unreasonable, and instead of asking for more money, the New Badger Partnership proposes reallocating within instead of asking from the outside.

The Partnership also proposes greater flexibility in order to give Wisconsinites the proper return on their investment in the University. This includes setting market-based tuition, providing adequate financial aid, and pay employees separately from state agency pay plans. This hits especially close to home for students who are wondering what this Partnership could mean for their tuition right now. (http://badgerherald.com/news/2011/01/17/state_budget_will_te.php)

Finally, the Partnership reinforces the ideas of nearly every politician in office or running for office in the past year: job creation. As a major research institution, the University has numerous outlets across the state for job-generating enterprise. The Partnership wants to provide opportunities to recent graduates who are looking to stay in Madison by creating new innovations and creating new job offerings to spur economic development.

To read more about the New Badger Partnership, visit newbadgerpartnership.wisc.edu for information, listings of recent news coverage, and events pertaining to the development and fostering of the Partnership.

Posted by WCSU Communications Intern at 12:50 PM No comments:

With 2011 getting underway, students are beginning preparations for the 2011-12 school year. As a soon-to-be sophomore, I’ve corrected a few of the errors I made as an incoming freshman and realized two of the most important things in preparing for the next year are housing and tuition. Both are relatively expensive prospects and require planning ahead.

In terms of housing, many students prepare far in advance, signing leases as early as October. But for new freshman, is one month really long enough to decide where and with whom you want to live? And while a lot of freshman (myself included) are having a hard time navigating the renting market and finding a place that’s affordable and acceptable to all of their roommates, older students who are already secure in their housing choices are limiting options for freshman, leaving something of an uneven playing field for fall rentals. This is a hot topic in the upcoming aldermanic race for the District 8 (campus area) seat on Madison’s City Council. A number of candidates are pushing property management groups to delay lease-signing dates in order to improve the rights of tenants and reform housing policies.

And of course as a new school year approaches, tuition is never far from any student’s mind. Especially for those students paying their own way through school (again, myself included), tuition is something of a sore spot. While Governor Scott Walker prepares his new state budget, students are left wondering whether or not University of Wisconsin funding will decrease and affect tuition. Free Applications for Federal Student Aid (FAFSA) are now available for the upcoming school year online, but in the current economic climate, loans and grants may seem uncertain. US News and World Report published a story today with some tips for seeking financial aid. (http://www.usnews.com/education/paying-for-college/articles/2011/01/31/6-steps-to-beating-the-shortage-of-financial-aid)

The UW provides a number of resources to help students manage their finances, including the job center (jobcenter.wisc.edu) and the Financial Aid Office website (finaid.wisc.edu). Likewise, our organization, the Working Class Student Union offers a support network of students who are going through or have gone through the same struggles to pay for the various costs associated with going to college. We want to lend our experience and advice to those first-generation and working class college students.
Posted by Kristina Kleinschmidt - WCSU Communication Director at 8:15 PM No comments: 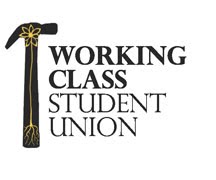